All About History Book of The Battle Of Britain digital subscription 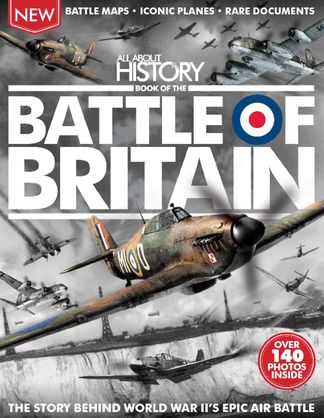 Few campaigns within either of the world wars are as well-known and remembered as the Battle of Britain. In this special 75th anniversary edition, you’ll find incredible images of the battle’s people and planes, its devastating effects, and in-depth information about key moments. You’ll also find fascinating insights into how people experienced the war, with facsimiles of documents including letters sent home to loved ones, instructional pamphlets used by pilots, and morale reports. Discover the battle through the eyes of those who saw it, and honour the sacrifices made three-quarters of a century ago. Featuring:
Forgotten heroes - Meet 10 of the heroes that made the Battle of Britain happen
Spitfire SM520 - Take a look inside the aircraft that helped train the pilots of the future
The battle in depth - From the battle's beginnings to the legacy it left behind
Amazing documents - From pilot's log books and morale reports to hand-written letters

Be the first person to tell us what you think about All About History Book of The Battle Of Britain and you'll save $5 on your next purchase!

https://www.isubscribe.com.au/all-about-history-book-of-the-battle-of-britain-digital-subscription.cfm 36107 All About History Book of The Battle Of Britain https://www.isubscribe.com.au/images/covers/au/5254/36107/square/AllAboutHistoryBookofTheBattle1916103520.jpg 13.78 AUD InStock /Digital/Arts & Culture/History The epic story behind WWII's defining air battle 13.78