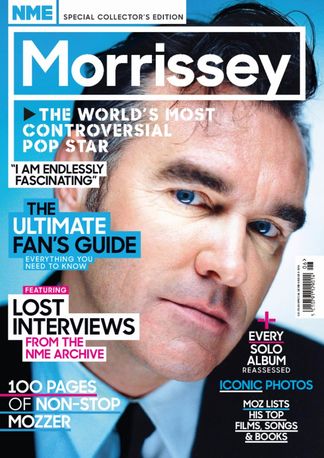 It’s been a weird five years for Morrissey. Since his last album, 2009’s ‘Years Of Refusal’, he’s experienced a series of seemingly irretrievable lows: cancelled shows, a bleeding ulcer, no record deal, quotes from himself saying things like “I’m slightly shocked to have gone as far as I have”. But with the publication of last year’s Autobiography, Morrissey took his first steps on the road that would lead to his musical return. It sold 35,000 copies in its first week, setting a new record for a musician’s memoir, and was, according to the man himself, “more successful than any record I have ever releases”. So as the world readies itself for Morrissey’s 10th album, ‘World Peace Is None Of Your Business’, what better time to celebrate the solo career of the world’s most controversial pop star? In his 26 years as a standalone artist he has triumphed, failed and delighted in equal measure, and over 100 pages of this special tribute magazine we tell the full story. Delving into the NME and Melody Maker archive, we reprint some of his most classic and memorable interviews. We also cast a fresh critical eye over every one of his solo albums, and discuss whether 2014 is his greatest comeback yet.

Be the first person to tell us what you think about NME Special Collectors' Magazine: Morrissey and you'll save $5 on your next purchase!