A TRIBUTE TO MONARO 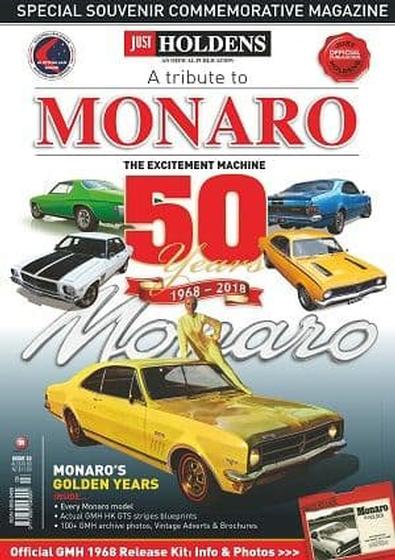 A special SOUVENIR MAGAZINE to mark the 50th ANNIVERSARY of the mighty MONARO. Over the decades Monaro Read more

A special SOUVENIR MAGAZINE to mark the 50th ANNIVERSARY of the mighty MONARO.

Over the decades Monaro has become part of our national psyche and a genuine cultural icon.

So what better way to celebrate this national milestone than with a magazine entirely dedicated to Monaro by the people who produce Australia’s only all-Holden magazine.

Packed from cover-to-cover only with Monaros. From the first HK GTS of 1968 through the second generation, HQ to HZ then leaping into the new millennium with the incredible fairy-tale that became the CV8.

* Each model Monaro is included here. The first in 1968 to the last in 2006.
* To really bring the era alive we let GMH tell you about each model in their own words. We scoured hundreds of original GMH sales brochures, advertisements and literature and used selected words and sentences from them to describe each amazing new Monaro. You’ll be entertained by the words and phrases from the 1960s and ‘70s – many of them highly politically-incorrect!
* Also using combinations of photographs from those same brochures and advertisements plus our own stunning studio photography – this is a magazine not to miss
* Plus, the original GMH MEDIA KIT that announced the arrival of the HK GTS on July 22, 1968, with all the wording from the documents, full specifications, AND, the actual GMH specifications diagrams for the GTS striping
* Production figures for each Holden coupe by models including HSV’s coupes
* Marvellous old photos out of Holden’s archives of Holdens on the production line in 1972!
* A story from GMH’s Lang Lang Proving Ground of a special commemorative event with 50 Monaros for 50 years on the actual 50th Anniversary day of July 22, 2018

Monaro was much more than a car. It was Australia’s first homegrown sports coupe and the equal of any mass-produced, affordable sports machine anywhere in the world.

This is a must have historic magazine for every Holden enthusiast.

Be the first person to tell us what you think about A TRIBUTE TO MONARO and you'll save $5 on your next purchase!

A TRIBUTE TO MONARO is published by Investment Vehicles Pty Ltd who handle delivery and stipulate the lead time shown above. To view other titles by this publisher click here