Kill Everyone: Revised and Expanded Edition 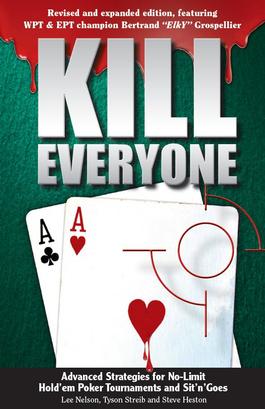 Cover Price: $44.95
Kill Everyone took the poker world by storm when it was first released in 2007. Its perfect blend of Read more

Kill Everyone took the poker world by storm when it was first released in 2007. Its perfect blend of real-time experience, poker math, and computational horsepower created new concepts and advanced strategies never before seen in print for multi-table tournaments, sit ‘n’ goes and satellites.

In this revised and expanded second edition, Kill Everyone adds even more ammunition to a tournament poker player’s arsenal. In addition to groundbreaking analysis of fear-and-fold equity and equilibrium, plus the presentation of optimal strategies for the bubble, the end-game, and heads-up play, this second edition adds 50 pages of incisive commentary from the hottest tournament-poker player in the world, Bertrand ElkY Grospellier, and a new chapter on short-stack cash games to go with the original discussion of playing in short-handed cash games.

When Lee Nelson’s last book Kill Phil was released, famed European poker professional Marcel ‘The Flying Dutchman’ Luske said the information in the book was “like giving the gun to the rabbit” in terms of the edge it gave to inexperienced players. First, an explanation: the Phil in Kill Phil refers to the unusual number of top poker players named Phil – Ivey, Hellmuth, Gordon, Phillips, et al. By extension, Kill Everyone is a warning message – watch out for anyone at the poker table whose read this book!

Be the first person to tell us what you think about Kill Everyone: Revised and Expanded Edition and you'll save $5 on your next purchase!

Kill Everyone: Revised and Expanded Edition is published by Monarch Media Pty Ltd who handle delivery and stipulate the lead time shown above. To view other titles by this publisher click here