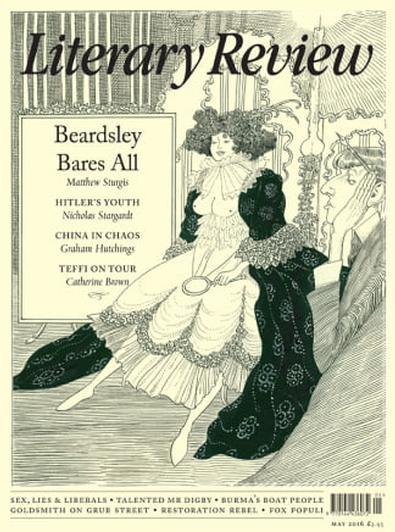 United Kingdom
Literary Review was founded in Edinburgh in 1979 by Dr Anne Smith, head of the English Department at Edinburgh University. Read more

Literary Review was founded in Edinburgh in 1979 by Dr Anne Smith, head of the English Department at Edinburgh University. She created a lively, intelligent literary magazine for people who love reading. From the start, Literary Review plugged in to the best and most exciting current writing. The reviewers are usually authors themselves, not just critics. In the 1980s, Auberon Waugh became editor. For fourteen years Waugh led the magazine and gave it the high profile it has today, including bringing on board Willie Rushton as cover illustrator. Nancy Sladek has edited the magazine for the last fifteen years and in 2015 was awarded the prestigious Benson Medal for outstanding services to English literature.The iconic covers have been illustrated since 1997 by Chris Riddell, who was made Children’s Laureate in 2015.Contributors to the magazine have included, among many others, Diana Athill, Kingsley Amis, Martin Amis, Beryl Bainbridge, John Banville, Julian Barnes, Hilary Mantel, John Mortimer, Malcolm Bradbury, A S Byatt, Paul Johnson, David Starkey, John Gray, Robert Harris, Nick Hornby, Richard Ingrams, Joseph O’Neill, Lynn Barber, Derek Mahon, Oleg Gordievsky, John Sutherland and D J Taylor‘This magazine is flush with tight smart writing.’ Washington Post‘Literary Review is extremely informative, well-written and altogether enjoyable. It is my favourite monthly magazine.’ Muriel Spark‘In Literary Review you find something that has almost vanished from the book pages: its contributors are actually interested in Literature.’

Be the first person to tell us what you think about Literary Review (UK) and you'll save $5 on your next purchase!

Please note this magazine will be a current issue at the time. For international titles please allow up to 10-13 weeks for your first delivery.

Literary Review (UK) is published by iSUBSCRiBE Ltd (Intl UK) who handle delivery and stipulate the lead time shown above. To view other titles by this publisher click here