1. What is Wildlife Australia magazine ? Who is it for and what does it cover?

Wildlife Australia is Australia’s longest-running nature magazine, featuring the continent’s unique wildlife and the research of top biologists, zoologists, marine scientists and other specialists in wildlife conservation and management around Australia and the globe. Although most of our authors are scientists, Wildlife Australia is written for laypeople and general enthusiasts too. It’s a magazine for anyone who loves nature and wants to learn more about the incredible animals we share our world with: their habits, habitats, and how they fit into ecosystems and adapt to change.

2. What's the best part about being the editor of Wildlife Australia Magazine?

Constantly learning new things! What we know about animals, about ecosystem management and about our changing climate and world is forever evolving, especially as new research comes to light and gene technology continues to advance. With each new issue, there’s something fascinating to learn. For instance, in the current issue, Spring 2017, I learned that male cuttlefish put on vivid zebra-striped displays when they fight with other males, that white sharks engage in oophagy (which means the shark pups eat their mothers unfertilised eggs while they’re still in the womb), and that a single earthworm can have both male and female sex organs! It’s great for increasing your general knowledge and winning trivia nights.

3. With so many different wildlife species appearing on the cover, could you tell us how you come up with which animal to feature on Wildlife Australia?

We feature many different species so that we’re catering to a lot of interests and celebrating animals across a range of taxonomical orders. We also love to showcase animals that don’t always get the kudos they deserve, such as invertebrates. Our September ‘cover model’ is a white shark (Carcharodon carcharias) by photographer Simon Phelps. These huge fish cop a lot of flak from the media, but its important to remember they are supreme apex predators that play a huge role in stabilising ocean ecosystems. They deserve to be revered, not targeted because of rare incidents that have to be kept in perspective. When featuring animals that aren’t typically cute and cuddly, we try to remove the fear factor and reveal just how magnificent these animals are and how important they are to our environment. We’re very lucky to be able to feature the work of some of Australia’s most talented professional and amateur wildlife photographers.

4. Why do you think Wildlife Australia is Australia's longest running nature magazine , when was the first ever issue published?

The magazine has a long and illustrious history. It was established in 1963 by the not-for-profit Wildlife Preservation Society of Queensland, with world-famous poet and conservationist Judith Wright at the editorial helm. I think the magazine’s success is largely because of the diversity of subject matter and because it consistently features stunning photography and natural history writing from luminaries and award-winning natural historians across so many scientific disciplines.

5. What are your top 3 favourite native Australian animals and why?

I have a real thing for dasyurids. They’re the carnivorous marsupials that are unique to Australia and they include the endangered numbat, quolls and some truly fascinating little dunnarts, phascogales and antechinuses which live rapacious, highly charged lifestyles. I’m also very fond of the northern quoll (Dasyurus hallucatus). If I must choose just three: 1. Numbat (Myrmecobius fasciatus) – because it is simply gorgeous, and its lifestyle as an ant-eating specialist is unusual and makes it quite susceptible to habitat destruction. 2. Platypus (Ornithorhynchus anatinus), for sheer weird factor. Along with the echidna, this monotreme is a living link between egg-laying and the modern mammalian trait of live birth, which is quite amazing. Plus, venom and electro-receptivity! Platypuses are incredible. 3. Pale-faced rosella (Platycercus adscitus). This last one is pure nostalgia. These beautiful parrots used to visit my childhood home at Mt Touchekoi, in the Sunshine Coast Hinterland. They’re quite shy, often flitting off if they’re seen. I like their lovely daintiness among our often big, bold and bright parrot species.

6. What advice can you give to readers who are wanting to get involved in protecting Australia's threatened plants and animals?

Just do it! There are so many ways you can help, some simple and some more involved. It doesn’t always have to be about donating, or spending huge amounts of time either. Nowadays, it can mean participating in citizen science initiatives (some even in your own backyard, just using an iPhone to survey species or habitat types). With apps and websites, some projects allow you to contribute valuable information or help analyse data in just a few minutes a day. All around Australia, not-for-profit groups like WPSQ are working on projects to safeguard our wildlife, but they can’t do it alone. It is not a lost cause. We still have time to ensure more of our species don’t go the way of the thylacine, and to protect wild habitats from destruction, we just have to speak up, act now and keep on doing our best.

7. What can readers expect from future issues of Wildlife Australia?

We’ve got some thought-provoking issues in the works. Our next issue, themed ‘Sensing’ will explore some of the super-senses of animals, from magnetic navigation to sensory skin organs, heat pits in python’s jaws, and thigmotropism (touch sensitivity) in plants, as well as the research of some sensory impaired scientists who are using their other senses to excel in their fields.

Early next year, our ‘Mortality’ issue will examine all things relating to death and resurrection – think critters that can regenerate limbs or ‘reconstitute’ themselves once dried or frozen, museum taxidermy and why it’s important as a conservation process, ‘wrong-sex’ offspring mortality, and toxic fungi.

Meet the Associate Editor... Steve Keipert
Meet the editor of In the Moment, a brand new magazine dedicated to mindfulness, creativity and wellbeing.
Meet the Editor of ABC Organic Gardener magazine... Steve Payne 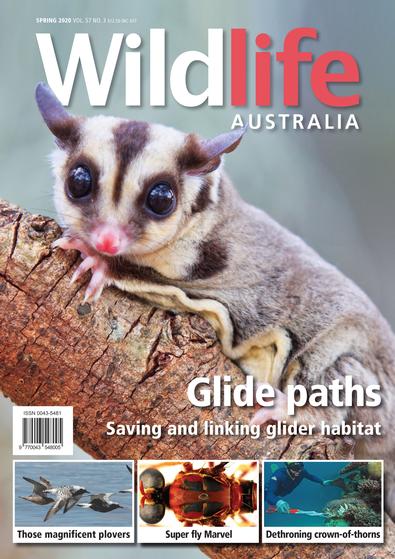