The Thing About Football 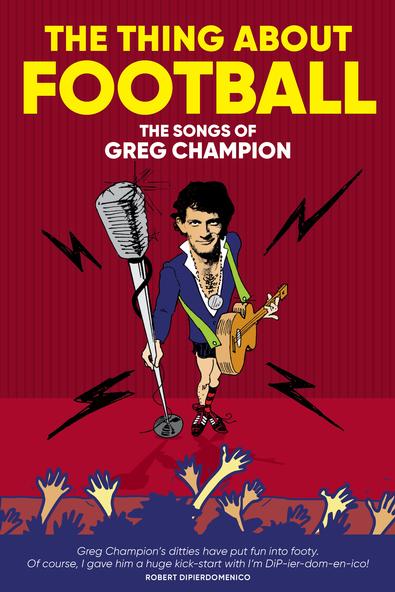 Cover Price: $29.95
Not many football identities can lay claim to the beloved stature enjoyed by Greg Champion without lacing Read more

Not many football identities can lay claim to the beloved stature enjoyed by Greg Champion without lacing up the boots or stepping into the commentary booth, but the Coodabeens’ star has spent decades delighting fans with the songs that comprise The Thing About Football: The Songs of Greg Champion.

Since his Coodabeens’ debut in 1983, ‘Champs’ has written thousands of football and cricket-themed songs that have become part of the Australian sporting vernacular, and for the first time their lyrics are collected in one place. From Dermott Brereton is a Hood and I Am Diperdomenico to There’s Only One Tony Lockett and Tony Modra’s Gone Surfing, Champion’s ditties and parodies have become favourite singalongs, harking back to simpler times when a lukewarm pie and a tattered beanie were all that footy fans needed for a day in the outer.

After 36 years on the ABC airwaves, Champs has also toured the country constantly since he first came to national prominence with his 1986 single, I made a hundred in the backyard at Mum’s. In 1995, the Seven Network adopted his fan favourite, That’s the thing about football, as its theme tune for AFL broadcasts, and the song became became ubiquitous.

Though many of the lyrics in this anthology will be familiar to lovers of Champion’s songs, the stories behind them might not. It is safe to say that Mrs Brereton wasn’t entirely pleased with Champion’s take on her famous son. Other Champion targets can only smile and laugh. As Hawthorn legend Robert ‘Dipper’ DiPierdomenico puts it: “Greg Champion’s ditties have put fun into footy. Of course, I gave him a huge kick start with ‘I am DiP-ier-dom-en-ico!”

Be the first person to tell us what you think about The Thing About Football and you'll save $5 on your next purchase!

The Thing About Football is published by The Slattery Media Group who handle delivery and stipulate the lead time shown above. To view other titles by this publisher click here