A Life in Golf, Inspirations & Insights 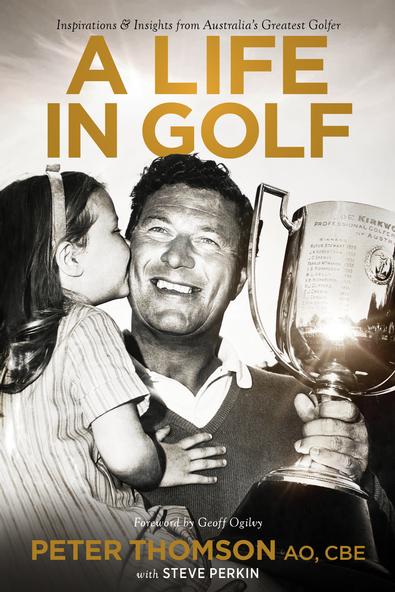 Cover Price: $26.95
The legendary five-time British Open champion, Peter Thomson, shares the knowledge he absorbed over a lifetime of golf in this engaging and inspirational book. Read more

The legendary five-time British Open champion, Peter Thomson, shares the knowledge he absorbed over a lifetime of golf in this engaging and inspirational book. Thomson’s evocative prose and firm opinions shed light on his career, golfing techniques, and the world’s greatest players. Experience the magic of the Old Course at St Andrews through Thomson’s eyes, understand why analysing your golf swing may not get you anywhere, and discover the weaknesses of Tiger Woods and Greg Norman and the genius of Sam Snead and Jack Nicklaus. My Life in Golf is essential reading for anyone interested in the game of golf, and a fitting last testament of an Australian sporting hero.

WHO WAS PETER THOMSON? Thomson is widely considered as one of the world’s greatest golfers with 82 professional wins. Upon his death, aged 88, in June 2018, Jack Nicklaus said, “We have lost a special member of golf’s global family,” and Gary Player paid tribute to “a fine global ambassador for our game.” Five-time British Open golf winner (1954, 1955, 1956, 1958, and 1965). Won the New Zealand Open nine times. Winner of 34 Australian tournaments, including the Australian Open in 1972. Winner of 26 European tournaments, including the British Masters in 1968. The only person to win the British Open over three consecutive years in the 20th century. Inducted into the World Golf Hall of Fame in 1988. In 1986 he won the Arnold Palmer Award as the player who won the most Champions Tour prize money in a year, a year in which he won an unprecedented NINE Seniors’ tournaments. He served as president of the Australian PGA from 1962 to 1994 and, in 1998, captained the International team to victory in the Presidents Cup.

Be the first person to tell us what you think about A Life in Golf, Inspirations & Insights and you'll save $5 on your next purchase!

A Life in Golf, Inspirations & Insights is published by The Slattery Media Group who handle delivery and stipulate the lead time shown above. To view other titles by this publisher click here