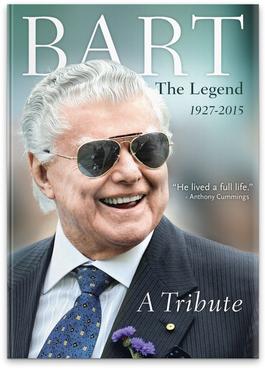 Cover Price: $15.00
The great Australian and Australia’s greatest horse trainer Bart Cummings died aged 87 on 30 August, as the racing world was preparing for the start of the famous Spring Carnival. Read more

The great Australian and Australia’s greatest horse trainer Bart Cummings died aged 87 on 30 August, as the racing world was preparing for the start of the famous Spring Carnival. The carnival climax is the Melbourne Cup, with which Bart has become synonymous because of his record 12 wins, spawning his nickname ‘The Cups King’.

Cummings, a racing legend through deed and through designation, having been given that rare status by the Australian Racing Hall of Fame, is immortalised in bronze at Flemington, the scene of his Cup wins from 1965 (with the great and brave mare Light Fingers) to 2008 (Viewed).

The Slattery Media Group, with the Herald Sun, pays tribute to Cummings and his life well lived in a special 96-page commemorative magazine. It gives just kudos with articles and photos of his legendary career that brought 268 Group 1 successes, including:

The 12 Melbourne Cup wins, and his every runner;
The 7 Caulfield Cups;
The scores of Classics—the Derbies, Oaks and Guineas;
The 4 Golden Slippers;
The 3 Cox Plates;
The 11 Mackinnon Stakes;
The 13 Australian Cups;
The group 1 sprints, including 8 Newmarket Handicaps;
The memorable successes over a “mile”;
Other milestones on and off the track, including the Order of Australia award.
Those close to Bart tell what he meant to them and their careers, and those who tallied the stats reveal the list of his champions, from his first Group 1 winner (Stormy Passage, 1959 SAJC Derby) to No. 268, (Hallowed Crown, 2015 Randwick Guineas, in partnership with grandson James Cummings).

Celebrate Bart and his monumental achievements with Bart. The Legend.

Be the first person to tell us what you think about Bart. The Legend. and you'll save $5 on your next purchase!

Your subscription will begin with the next available issue and in most cases, your magazine will be in your hands before it goes on sale in the shops! Due to publishing cycles and potential delays with Australia Post, please allow up to 2-5 weeks for your first delivery to arrive.

Bart. The Legend. is published by The Slattery Media Group who handle delivery and stipulate the lead time shown above. To view other titles by this publisher click here