The Shinboners - Complete History of the North 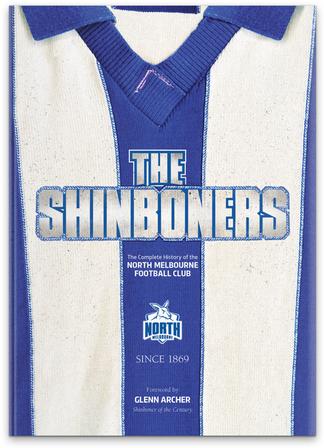 Cover Price: $49.95
“In two aspects North Melbourne stands second to none. One is the loyalty of its supporters. The other is the determination to carry on despite its disadvantages. Read more

“In two aspects North Melbourne stands second to none. One is the loyalty of its supporters. The other is the determination to carry on despite its disadvantages. In the face of adversity, which might well have broken the spirit of most men, we find that from the earliest days there were always enthusiasts to fight for North Melbourne.” – The Australasian 15 June 1940

Having put behind it almost 150 years of experience as one of Australia’s leading football clubs, North Melbourne has reason to be proud. North’s is a fine heritage,a source of justifiable pride to all who have contributed to its development since its inception in 1869. The club’s achievements, splendid as they are, are even more praiseworthy when it is appreciated how impoverished were some of the phases through which it has passed, and the relatively small supporter base it had to work with, competing against more affl uent clubs.

The ‘Shinboners’ have had their share of premierships and other honours, yet it would be a mistake to think that the North tradition arose merely from its successes. It has been created more so by generation of after generation of North Melbourne players, officials and supporters—tested by poverty, challenged by defeat and resolutely dedicated to the persistent triumph of the Royal Blue and White.

This is their story.

Be the first person to tell us what you think about The Shinboners - Complete History of the North and you'll save $5 on your next purchase!

The Shinboners - Complete History of the North is published by The Slattery Media Group who handle delivery and stipulate the lead time shown above. To view other titles by this publisher click here