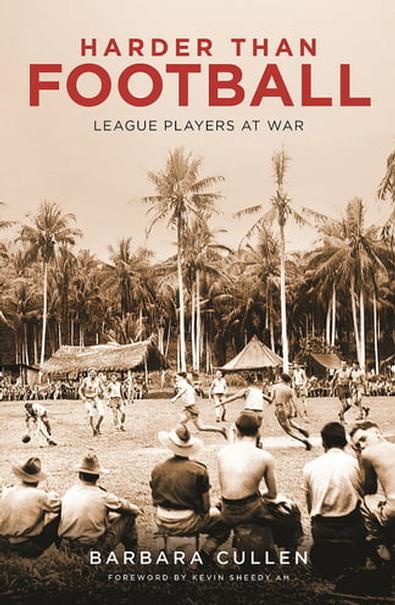 In 1915, while stationed at Gallipoli, St Kilda player Stan Brady wrote his mother a touching letter in which, after worrying for the safety of his brothers he told her, poignantly, “It is harder than football here”.

Australian servicemen have long been renowned for their unfaltering courage, sense of mateship and strength of character—the same values that are so apparent in our national game of football. With a foreword by Kevin Sheedy, in Harder than Football stories of courage, resilience and survival shine through like beacons, along with acts of bravery and sacrifice that so succinctly display the ‘Aussie spirit’. Of course, there is the odd larrikin, too, whose often humorous acts of disobedience include smoking on parade, changing pay books, “accidentally falling out of a train” and “being improperly dressed on the line”. Within these pages you’ll find the stories of the 2494 men who played at least one senior game from 1897 to 1972 and fought for their country in every major conflict from the Boer War to the Vietnam War.

Be the first person to tell us what you think about Harder Than Football and you'll save $5 on your next purchase!

Harder Than Football is published by The Slattery Media Group who handle delivery and stipulate the lead time shown above. To view other titles by this publisher click here