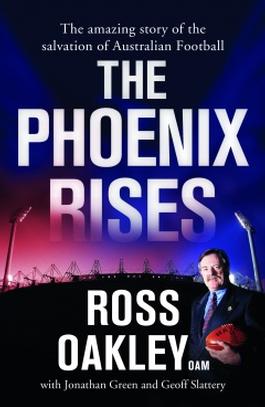 Cover Price: $34.95
The Phoenix Rises is the remarkable story of the transformation of ‘Australia’s Game’ from a troubled Read more

The Phoenix Rises is the remarkable story of the transformation of ‘Australia’s Game’ from a troubled Victorian Football League to the Australian Football League powerhouse of today, told by the man who pulled the levers for drastic change.

In 1986, Ross Oakley was appointed chairman and CEO of the struggling VFL. During the 10 years that followed he oversaw the revolution of the game and its administrative structure, and took the League from all but broke into a massive business. Often faced with very public and emotive opposition and criticism, he took brave decisions to take the game to new frontiers. His legacy is the national competition, and Australian sport's most professional administration, led by the AFL Commission.

Told from Oakley’s unique vantage point, The Phoenix Rises revisits the 80s, a turbulent and divisive era in AFL history, and reveals, for the first time, the off field tumult that took place, often behind closed doors. From never before revealed insights taken from the confidential minutes of the League, to the faltering steps behind the AFL’s ground-breaking Racial and Religious Vilification laws, The Phoenix Rises exposes the full picture, and the truth behind the drive to the national competition and the independent Commission.

In praise of The Phoenix Rises, legendary football journalist Mike Sheahan writes: ‘This book reminds us of how the transition unfolded and of the constant drama that beset those early days. It is a painstaking exercise of interviews with key participants, of hours and hours poring over minutes of dozens of critical meetings, of reflections formed and strengthened by time.’

The Phoenix Rises is the perfect book for AFL fans, sports enthusiasts and sports administrators. With Father’s Day not far away it’s also the ideal gift for the footy mad dad.

Be the first person to tell us what you think about The Phoenix Rises and you'll save $5 on your next purchase!

The Phoenix Rises is published by The Slattery Media Group who handle delivery and stipulate the lead time shown above. To view other titles by this publisher click here