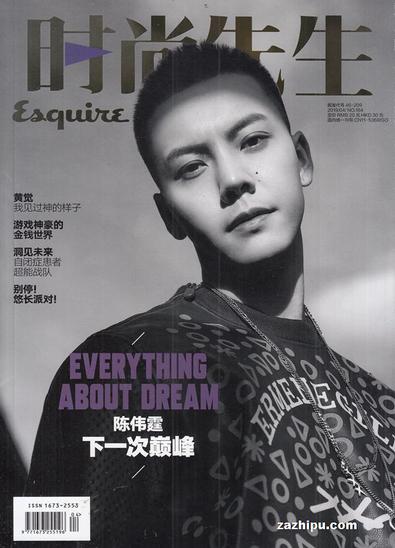 China
Cover Price: $43.80
Esquire is a long-running American men's magazine. In the United States, it has been published by the Read more

Esquire is a long-running American men's magazine. In the United States, it has been published by the Hearst Corporation since 1986, also having over 20 international editions.

Founded in 1933, it flourished during the Great Depression and World War II under the guidance of founders Arnold Gingrich, David A. Smart and Henry L. Jackson while during the 1960s it pioneered the "new journalism" movement. After a period of quick and drastic decline during the 1990s, the magazine revamped itself as a lifestyle-heavy publication under the direction of David Granger.

Be the first person to tell us what you think about Esquire (Chinese) and you'll save $5 on your next purchase!

Your subscription will begin with the next available issue and in most cases, your magazine will be in your hands before it goes on sale in the shops! Due to publishing cycles and potential delays with Australia Post, please allow up to 4-7 weeks for your first delivery to arrive.

Esquire (Chinese) is published by Osia Enterprise Ltd who handle delivery and stipulate the lead time shown above. To view other titles by this publisher click here