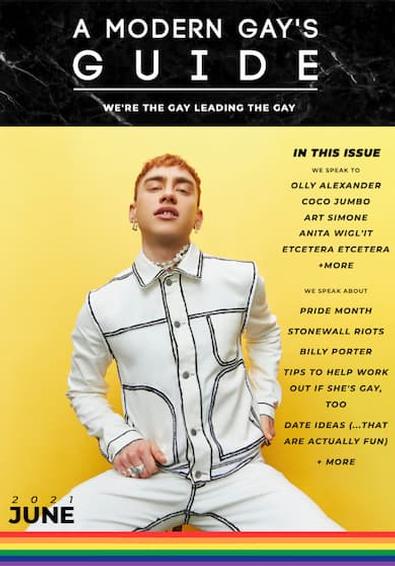 Cover Price: $8.20 you save up to 21%
We're the gay, leading the gay. We’re Australia & New Zealand’s LGBTIQ+ advisers on all things eat, Read more

If it’s anything LGBTIQ+ related, we’ve tried it, tasted it, met them, been there, done that, thrown it on the ‘gram & are now here to show the rest of the LGBTIQ+ community the way.

We are A Modern Gay's Guide.

In addition to interviewing these sensational queer celebrities, we’ve also run some really important articles, close to the LGBTIQ+ community’s hearts, including:
- ‘Trans Excellence’ – Shinning a light on extraordinary Trans identifying individuals
- ‘The Importance of Body Positivity in the Queer World’
- Full Coverage of the 2021 Sydney Mardi Gras
- ‘Racism on Gay Dating Platforms’
- ‘Coming Out in the Corporate World’

Be the first person to tell us what you think about A Modern Gay's Guide and you'll save $5 on your next purchase!

Your subscription will begin with the next available issue and in most cases, your magazine will be in your hands before it goes on sale in the shops! Due to publishing cycles and potential delays with Australia Post, please allow up to 1-2 weeks for your first delivery to arrive.